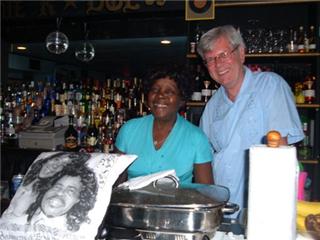 
ANTOINETTE DORSEY K-DOE, 66, passed away of a massive heart attack in the wee hours of Mardi Gras morning, February 24, 2009
in New Orleans in her own home at the Mother In Law Lounge on North Claiborne Avenue. She was the widow of the self-styled
Emperor of the Universe, New Orleans music hit-maker Ernie K-Doe, and was a pillar of strength in the New Orleans music community.

Her long-time friend and business partner, Geannie Thomas, was with Antoinette when Antoinette took her last breath. Paramedics
were unable to revive her.

"She loved Mardi Gras so much as everybody knows. She loved life, and we had just ridden in parades that night of Lundi
Gras," Thomas said. "We came back to the Mother In Law and she was tired but really happy. This year the weather was
particularly beautiful with people out in the streets. Antoinette was having a wonderful Mardi Gras season."

With family and friends in from out-of-town staying with Antoinette upstairs at the Lounge (as is a common scenario to
host people at Mardi Gras for New Orleanians), it didn't seem unusual for Antoinette to have gotten up to go downstairs alone,
where the Lounge is located, in the early hours of Mardi Gras morning. When she didn't return, Thomas went to check on her
around 3 am.

"I found her saying she was feeling really hot," Thomas said. "I finally got her over to the couch."

Within moments of this, Antoinette suddenly passed away peacefully there on the couch in the Mother In Law Lounge, an
establishment she always envisioned for encouraging Ernie K-Doe to showcase his music. She nurtured the Mother in Law Lounge for
decades, while hosting worldwide visitors and luminaries, fans and music legends, as well as local music lovers, family and
friends.

"Antoinette died in my arms," Thomas said, tearfully. "She was gone that fast, peacefully. On her favorite day of
the year, Mardi Gras."

Thomas hopes to continue the life of The Mother In Law Lounge in honor of Ernie and Antoinette K-Doe if there's the possibility
that the qualified-Thomas can take up where Antoinette left off. For regulars at The Mother In Law Lounge, they know Thomas well,
and know that Thomas and Antoinette were inseparable, along with praline queen Tee-Eva, another dear friend. The three women were
Baby Dolls together with Antoinette always at the helm of exciting music activities.

Antoinette was an incredible woman of strength and courage.

Armand St. Martin, a New Orleans pianoman and current entertainer at the Ritz-Carlton New Orleans, spearheaded a series of
"Midnight Jams" at the Mother In Law Lounge in the fall of 2006, along with Ernest "Box" Fontenot (drummer for
Fats Domino) and past grammy-award nominee Guitar Slim, Jr., when all the local New Orleans musicians were struggling to return
after Katrina.

Antoinette was working non-stop, helping to bring back the community even though she'd lost everything in the flood at the
lounge herself. The Mother In Law Lounge was one of the first music spots to re-open.

"Antoinette would cook up her famous red beans and rice for free for everybody who came to these midnight jams," St.
Martin recalls, "and sometimes the musicians would play music together until 5 am. We all pulled together to help each
other survive the Katrina catastrophe. The Lounge would be filled with Hands-On young adults who had come to New Orleans to help
rebuild homes, families of musicians, music fans, famous faces, strangers, and lots of musicians who were able to hook up with
each other for gigging opportunities in the scramble after the storm."

This "Midnight Musician Jam Series" was just one of thousands of examples of Antoinette K-Doe's "way":
always giving to the community, always looking out for the New Orleans musicians and their friends and fans, always reaching out
to people with her positive outlook towards the future while making as much as she could out of each day. She was a Reigning
Queen of Krewe du Vieux one year, in the Krewe of Muses parade another. She was constantly involved. She seemed to pop up
everywhere, always an active part of the community. The Mother In Law Lounge provided Antoinette with a conduit for helping others
while keeping alive the Ernie K-Doe music scene. She hosted people from all over the world.

Everyone who had the pleasure of meeting Antoinette K-Doe has a story, or many stories, about this extraordinary woman who
praised others, changed lives, graciously shared what she worked so hard to accomplish, promoted her husband Ernie K-Doe in his
life and after his death, and gave tirelessly to family, friends, strangers and the community at large. She is credited worldwide
for her brainchild creation of this world-famous name-drop location, and for especially carrying on the torch after the
unexpected passing of Ernie K-Doe in 2001. His 1961 Top 10 hit R&B and Pop-chart song (written and produced by Allen
Toussaint with Benny Spellman's undeniable bass-voice on back-ups) was, of course, the lounge namesake: "Mother In
Law".

Antoinette was a relative of Lee Dorsey, with music being a part of her life long before she met her larger-than-life husband. She
raised her children, helped those in need especially musicians, and had 27 foster children and a Godchild. Her adult life was
dedicated to giving. She was a very familiar face, name and reputation, not only in New Orleans but around the globe.

If anybody ever saw a hearse driving by an unusual location in New Orleans, it was usually Antoinette at the wheel of "her
car". She and Ernie lived a colorful life, which she carried-on, full-force, as his famous widow. If folks spotted her
hearse at an event, whether it was Mardi Gras or Jazz Fest or a music venue, they'd know Antoinette was there in person with her
signature red beans and rice, her bottled Ernie K-Doe labeled hot sauce, and her custom Ernie K-Doe life-sized statue in
full-regalia.

The outpouring over the news of the loss of Antoinette was generous. Owner John Blancher of internationally-known Mid-City
Rock 'n' Bowl opened up his venue and catered jambalaya for Saturday, February 28, from 2:30 - 6:30, so people could gather
to share Antoinette stories while a line-up of musicians performed in her honor. The long list of hard-hitting musicians
included Armand St. Martin, Guitar Slim, Jr., Big Chief Alfred Doucette, Frogman Henry, Reggie Hall, Lisa Lee, Mardi Gras
Indians, J Monqe'D, Bruce "Sunpie" Barnes, and Charmaine Neville, to list a few. Most musicians in New Orleans
made a royal effort to attend. Bethany Bultman, President and CEO of the New Orleans Musician's Clinic provided flowers for
Antoinette's Wake and Viewing.

The memories of this special woman, Antoinette "Nettie" Dorsey K-Doe, who "gave her all" and was as famous as
the famous people in her life, will be recalled for a long, long time to come. She was a legendary individual, a singer and
performer herself, an heir to the Ernie K-Doe's fame, a savvy business woman, a New Orleans icon, a mother, a grandmother, a
relative and a friend. She is already sadly missed.

Antoinette K-Doe was above all. . . a friend to all. 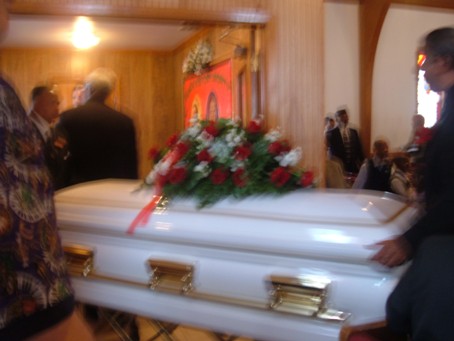 These are from the day of the services, Feb. 28th, Saturday. (The wake was at the
Mother In Law Lounge on Friday and was attended by thousands who lined past the open casket in the Lounge).

One photo (rare) is at the church after the services and gospel performances.

(Since literally thousands showed up, only 20 people got to go into the church at a time. So most folks who came
for the Jazz Funeral were not allowed into the church.) Sorry the photo is out of focus, but it's effective and rare.
I believe I was standing there where nobody else took a photo as the casket was being carried from the church. 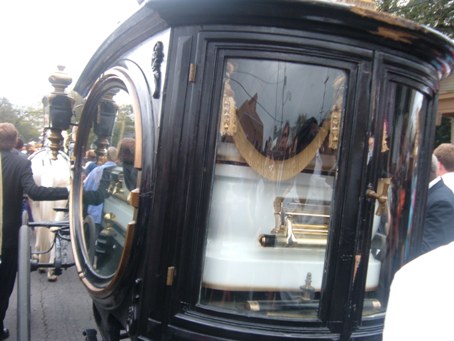 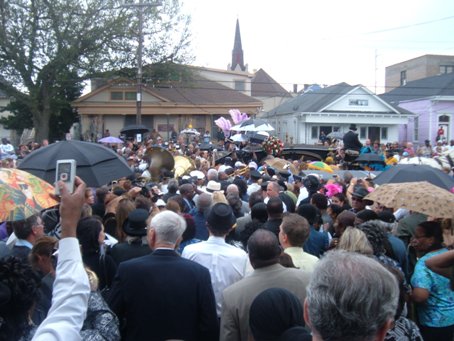 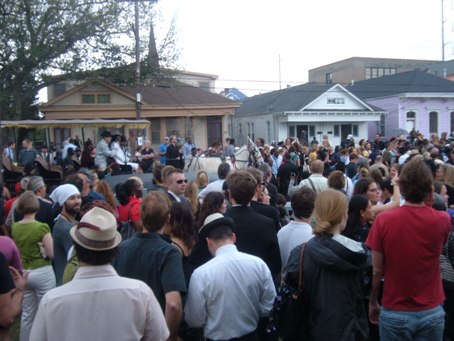 Outside the church there were throngs of people as you will see in the short series. I sent these pix just so you could get a "sense" of what it was like.
People from all walks of life loved Antoinette. You'll see the 2-white-mule drawn carriage with her casket in it. 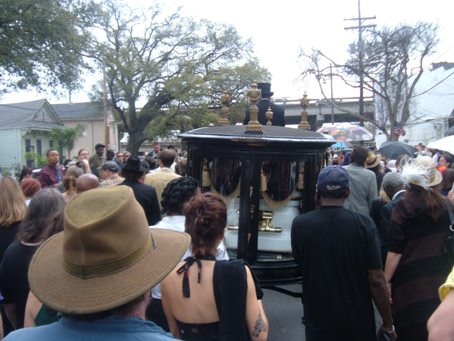 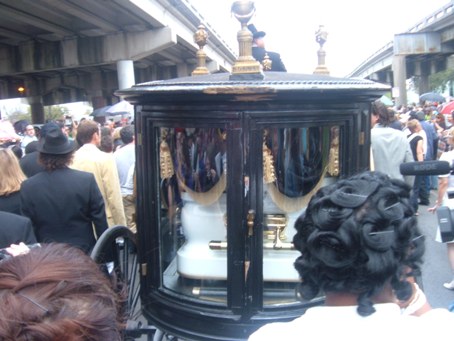 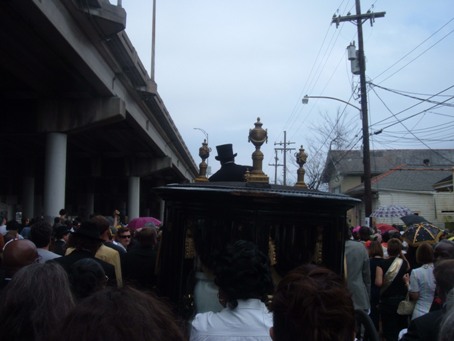 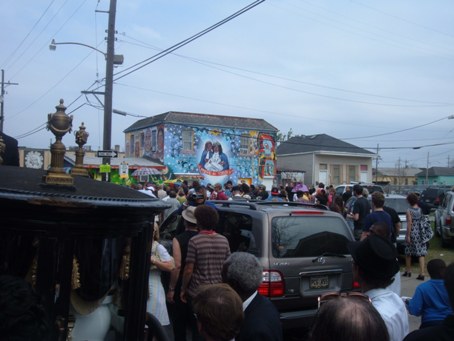 You'll see the Jazz Funeral with the people slowly going down the streets. As the funeral procession passed thousands
on the sides of the streets, the people would then fold into the procession making it longer and longer. It went for miles.
There was a brass band, Bayou Steppers, second-liners in front of the Jazz Funeral, leading it, but I was behind the carriage
with the casket and Antoinette's remains. So these pictures were from that point of view. 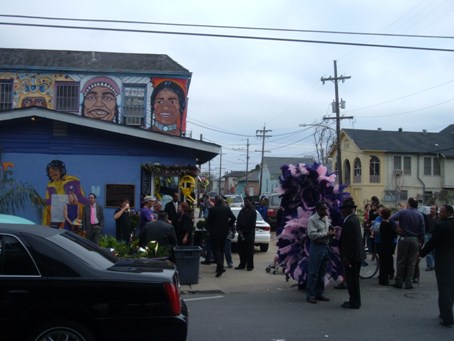 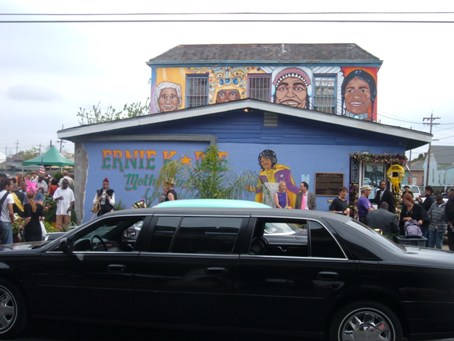 The stretch black limos in front of the Mother In Law where the Jazz Funeral ended (from coming from the church), was for the family members. 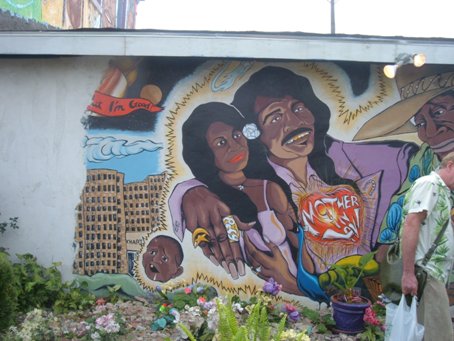 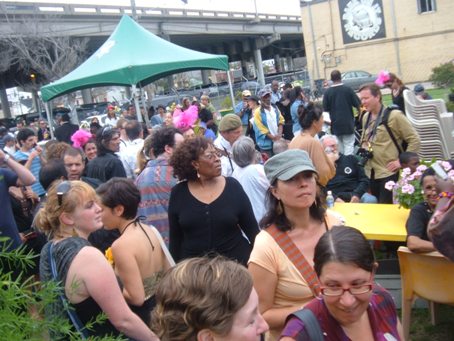 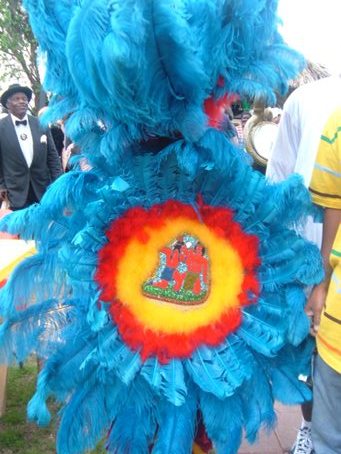 The back of a Mardi Gras Indian in costume. 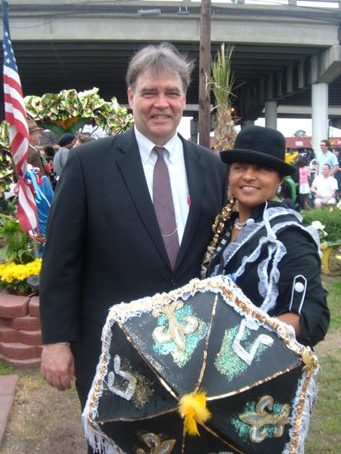 Armand is with a Bayou Stepper named Jennifer Jones. (I'm not sure but she might be the daughter of Joe Jones.) 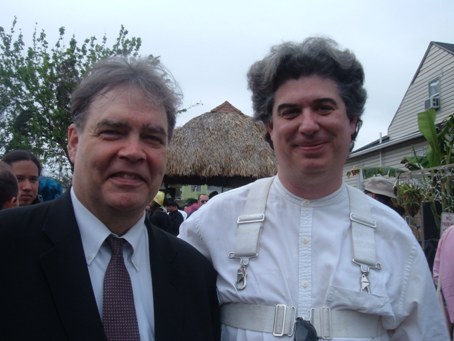 Armand with a marching band member. 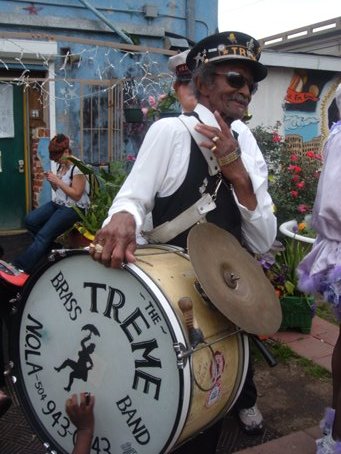 Mr. Lionel is the musician in the fancy Treme Marching Band outfit. He's in his 90's, I think, and he's spry. (He lost his grand-daughter in the flooding of Katrina.) 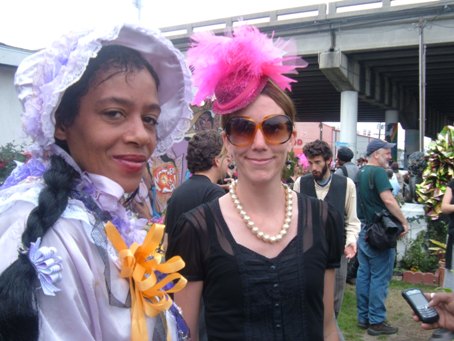 Two women - one is a Baby Doll; the other is a Bayou Stepper. 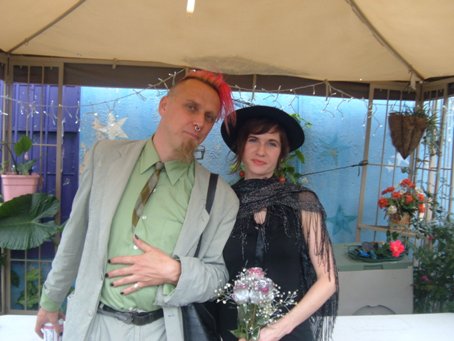 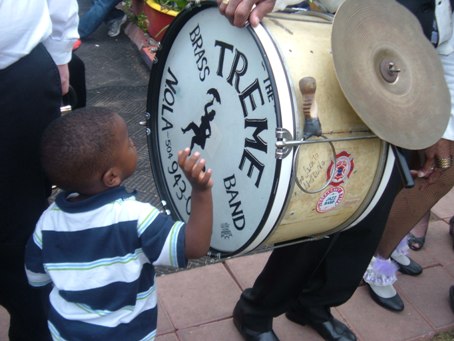 I put the photo in, of the punk kids because they were dressed nice for Antoinette, and they represent the spectrum of the wide range of folks who frequented the Mother In Law Lounge.

You are the first folks to get my pix! Hope you can get a
"feel" of the experience. These aren't fabulous photos, but an
archived record of the day's events. However, they are
from my point of view (and Armand's) so they may be
slightly different than anybody else's from that standpoint.

Thanks for yall's caring about our music icon!

Glad we can give our Woodies a first-glance.