Tales From The Woods Rock'n'Roll Heritage Show No. 11 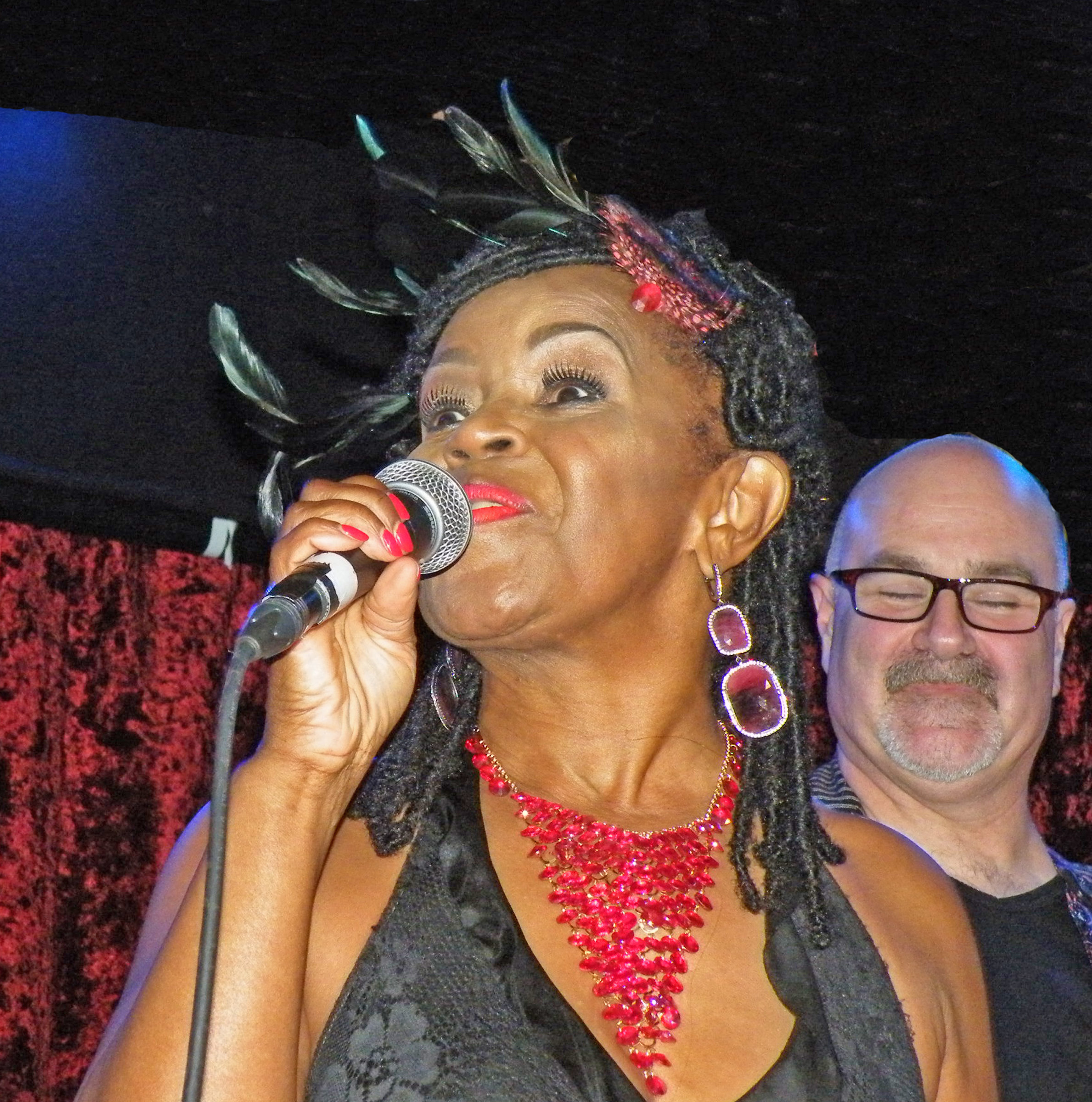 The latest Tales From The Woods show at the Borderline in London last night - the 11th in the series of rock and roll heritage shows
organised by Keith Woods - was yet another triumph, with a good sized crowd enjoying five hours of virtually non stop music. This
time the star was not a rocker but a bona fide soul great in the form of P P Arnold. She was the final act in a show featuring no
less than five performers from the fifties and sixties, all of them good in their way and all of them backed excellently by the
Tales From The Woods House Band. 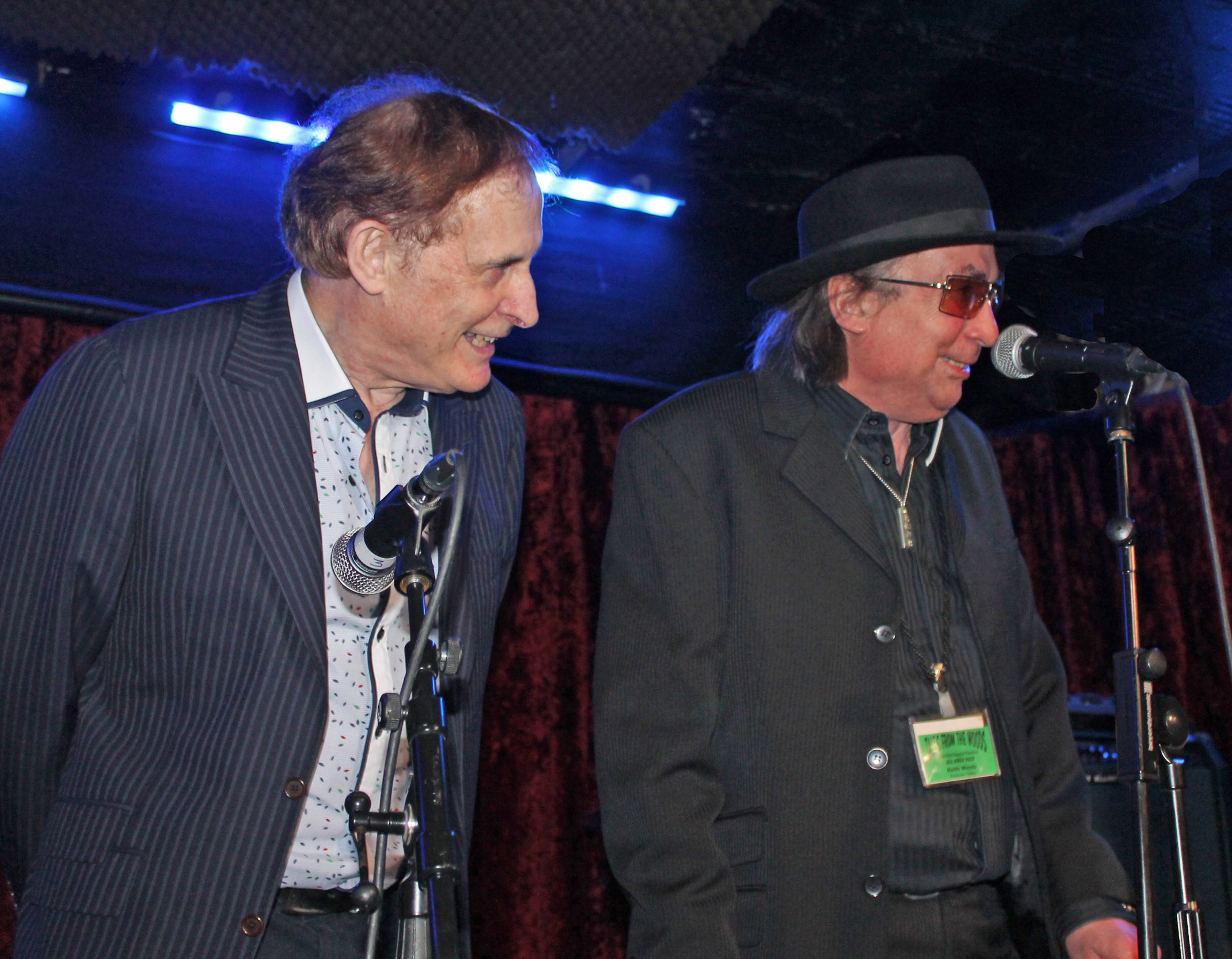 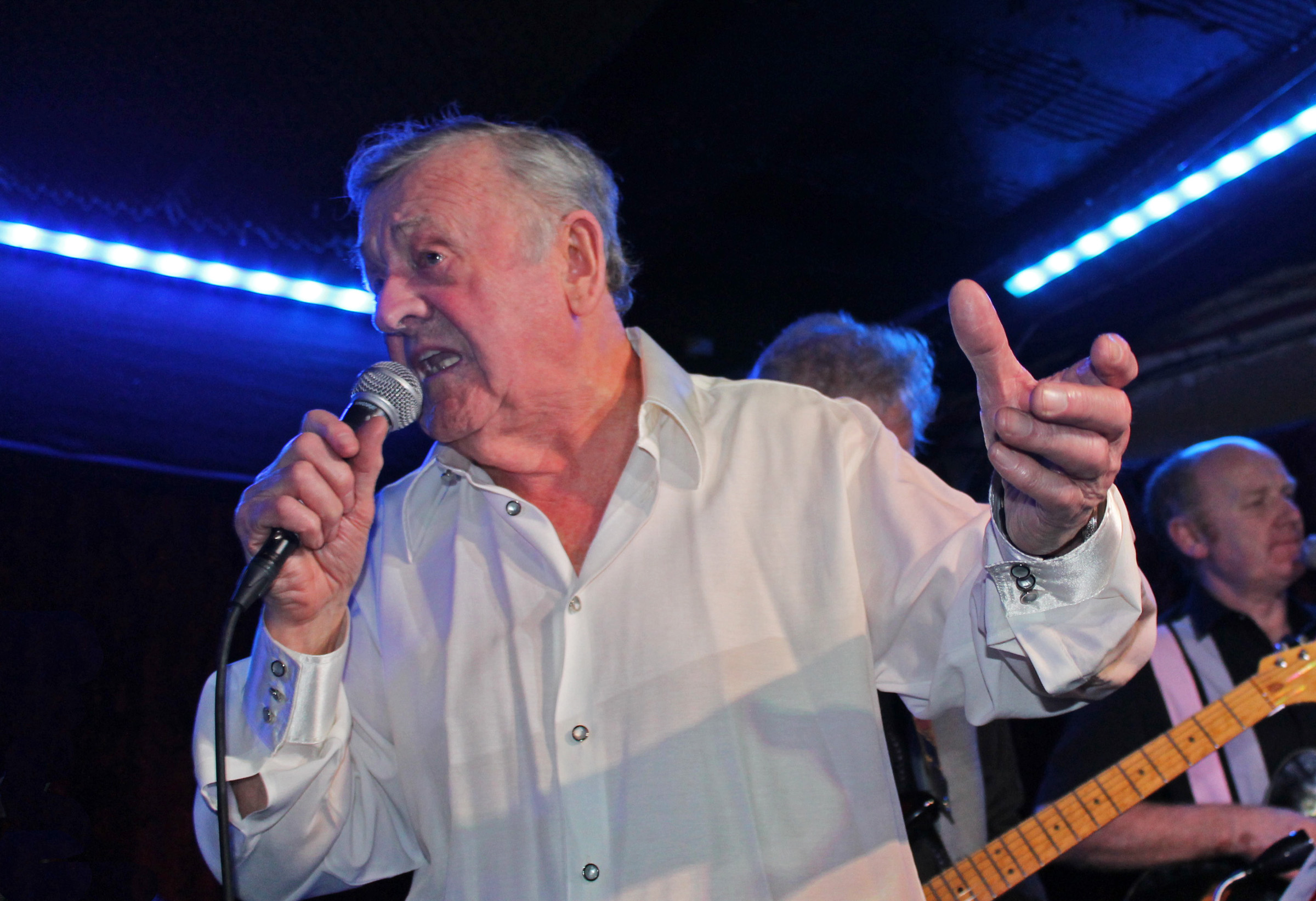 Wee Willie Harris, now 82 years old, has appeared at Tales From The Woods shows a good number of times.
His voice is still pretty good and his set included Rockin' At The Two I's and Love Bug Crawl which he recorded nearly 60 years ago.
He says he stopped wearing his rock'n'roll gear when he reached 80, but he still rocked out with Blue Moon Of Kentucky, Kansas City,
Splish Splash, I Hear You Knocking, Razzle Dazzle and Rag Mop and Shake Rattle And Roll. 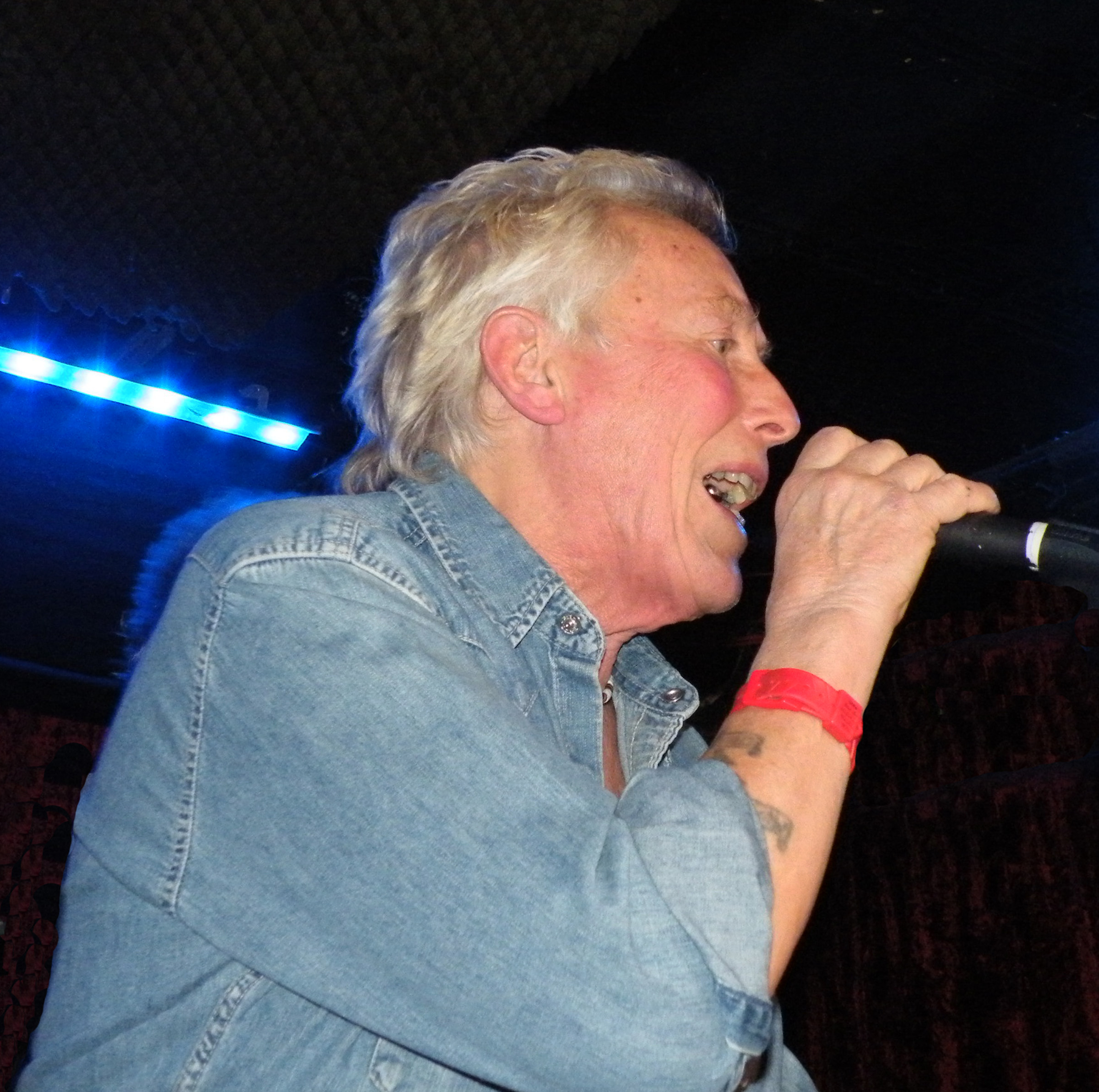 Ray Phillips, former front man of the Nashville Teens, combined lively versions of rockers such as Nadine, Let It Rock, Forty
Days and Bony Moronie with some quality blues numbers, including Red House (featuring some Hendrix styled guitar from Iain Terry, lead guitarist
of the TFTW band), Hoochie Coochie Man and I Put A Spell On You, which allowed keyboard player Claire Hamlin to shine. Of course the
Nashville Teen's big hit Tobacco Road was featured, and performed well, and it was clear that Ray was enjoying himself immensely. 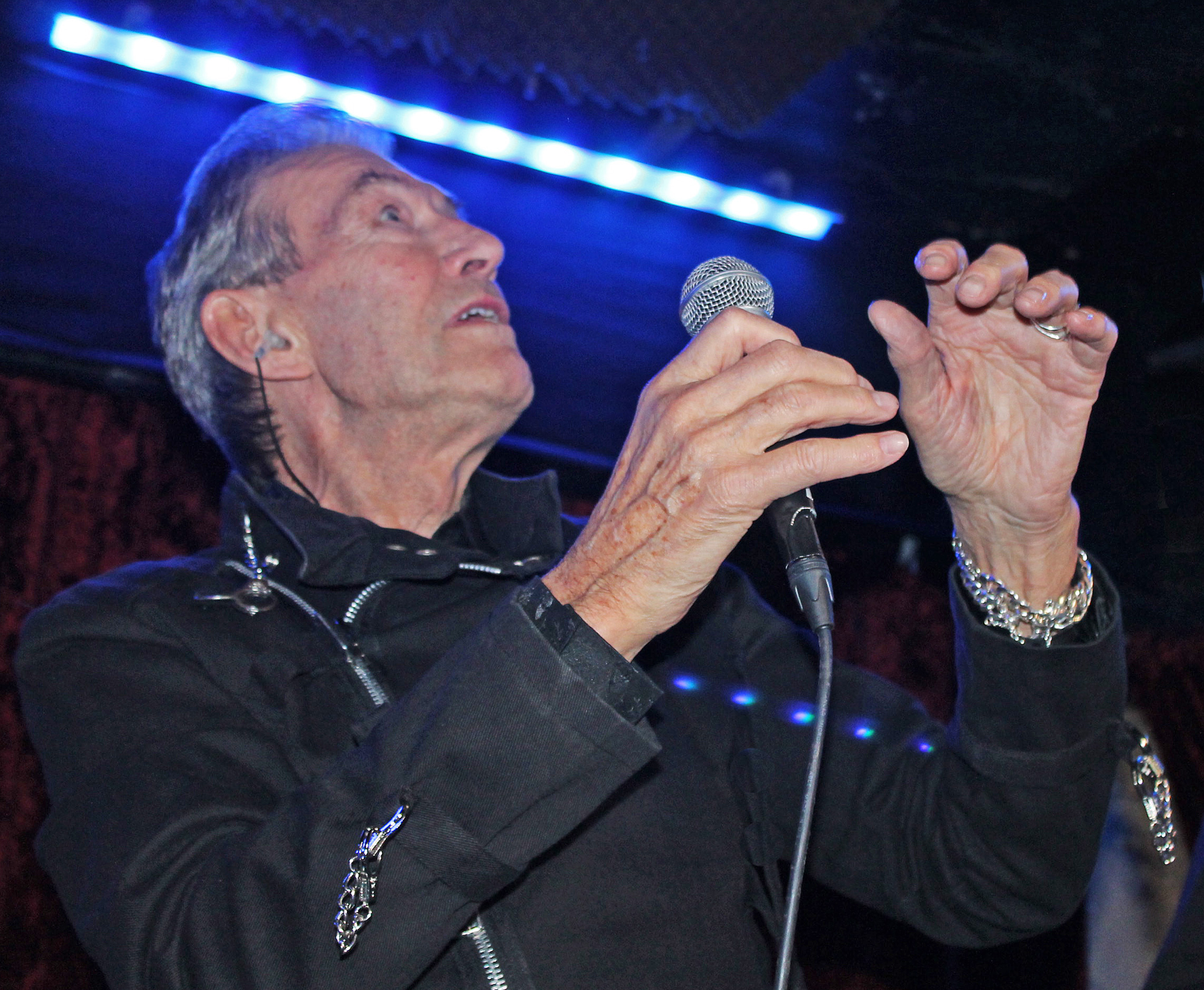 
At the height of the sixties beat boom Dave Berry made a name for himself not only with some catchy and well performed pop sings, but also
with a stage act which involved hiding himself behind a glove or wrapping the microphone lead around himself. Today he is no different it
seems. His voice remains pure and the songs and stage act are much as we remember them. This was his TFTW debut and it proved an effective
one. Dressed in a black jacket covered with a selection of chains he kicked off with Just A Little Bit before moving on to one of his bigger
hits, Chuck Berry's Memphis Tennessee. Some amusing ad libs showed that Dave is an accomplished stage act - he's still performing on 'silver
sixties' tours after all - with a good repertoire, which included another big hit of the era Little Things, a cover of a Bobby Goldsboro song
which gave Dave more recent fame as a toilet paper ad. Other numbers included Chuck's Promised Land, This Strange Effect, written for him by
Ray Davies, the Yardbirds' Heart Full Of Soul, Nick Lowe's I Knew the Bride When She Used To Rock And Roll and, finally, The Crying Game,
which was featured in the film of the same name. Dave was joined on stage by former member of his band the Cruisers Brian Wood on steel
guitar. At the end of his set Dave stripped off his jacket to reveal a shirt with the black imprint of a pair of hands on the back. And the
crowd gave him a well deserved big hand. 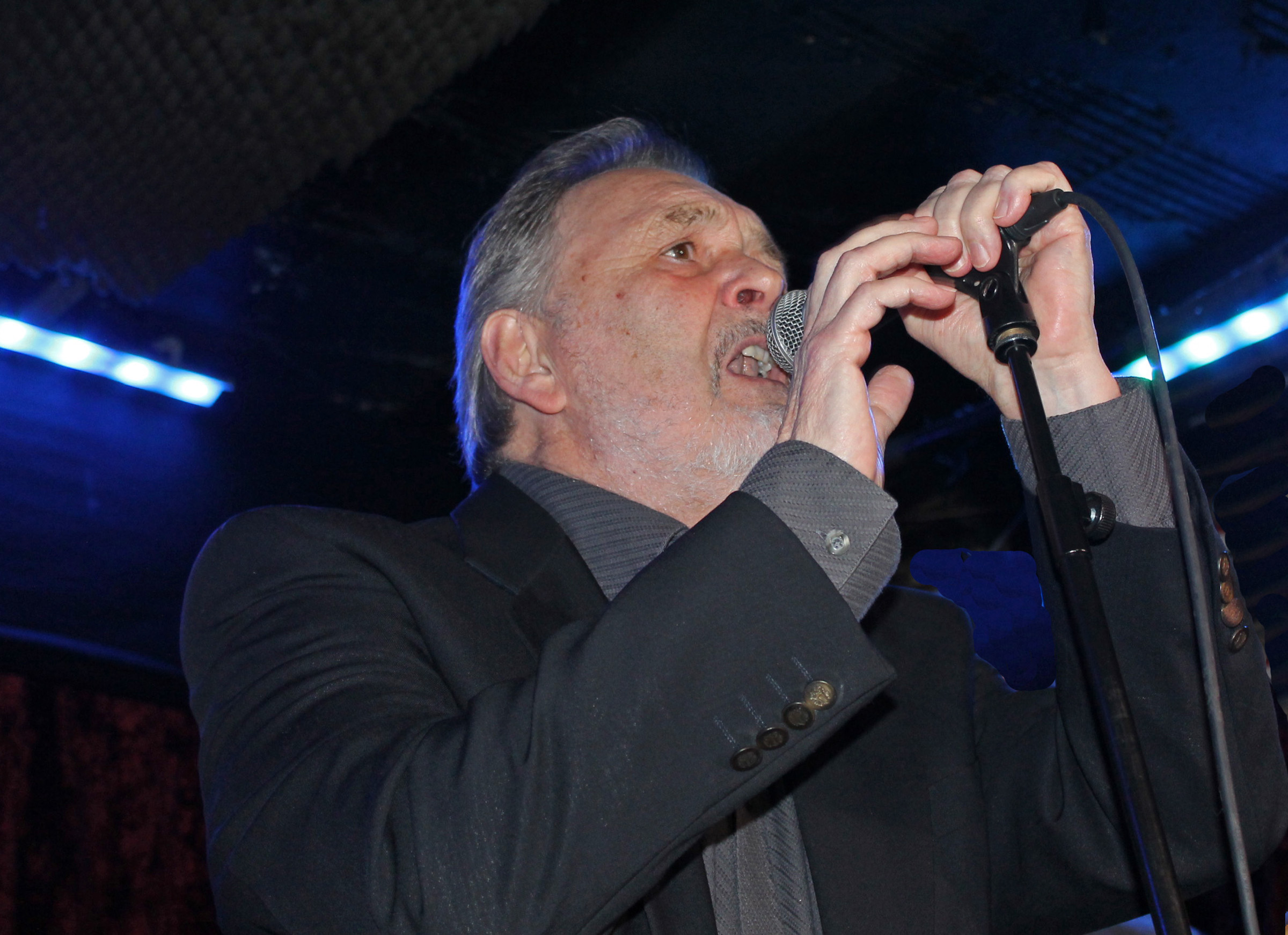 
Cliff Bennett was making his third appearance on a Tales From The Woods show, and he is always welcomed enthusiatically by our audience.
His sets are a combination of classic rock'n'roll songs and mostly up-tempo soul numbers, and tonight he included Turn On Your Lovelight,
Knock On Wood, Barefooting, Slow Down, Good Golly Miss Molly, Watch Your Step, Why Me and Sam and Dave's I Take What I Want.
Former Rebel Rouser 'Too Tall' Tony Hall joined the Tales From The Woods Band's horn section to give him some top notch backing in what was
an energetic and enjoyable set. He also paid tribute to his long-time friend and former Rebel Rouser, and recent member of the Tales From The
Woods Band, Sid Phillips, who passed away not long ago. 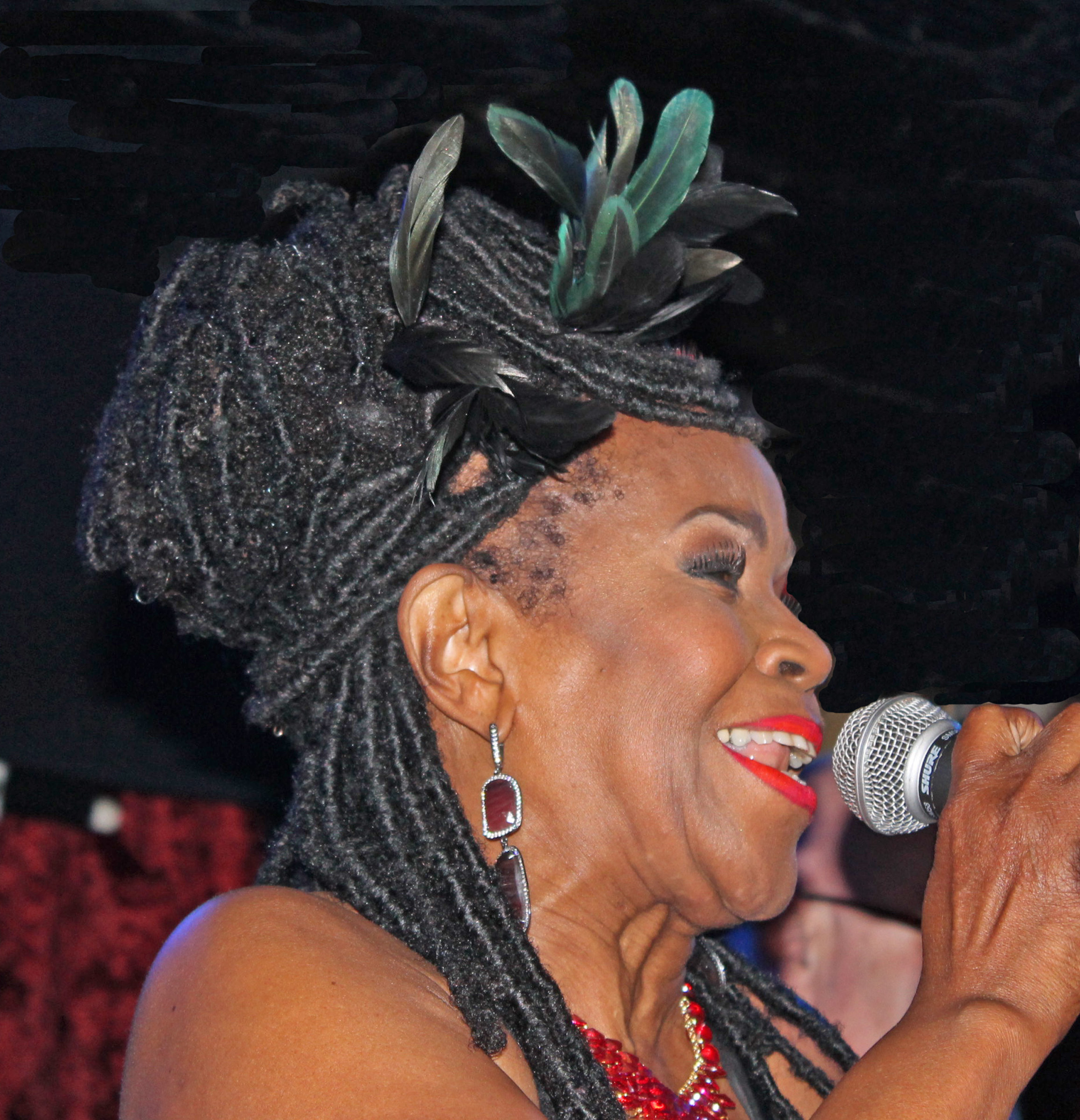 
Originally from Los Angeles, P P (Pat) Arnold first found fame as a member of the Ikettes, backing up Ike and Tina Turner, before moving to the
UK and enjoying a successful solo career. With great vocal support from Debra Lewis-Brown, she began her act with the Ikettes number Whatcha Gonna Do,
moving on to an exciting version of River Deep Mountain High. Her voice remains completely intact and she looked glamorous in a black dress, red
necklace and a feathered fascinator. She told the story of how Mick Jagger had taken her for a walk in Regents Park and made a proposition to her -
a proposition which led to her recording for Andrew Loog Oldham's Immediate label. She recorded the first version of Cat Stevens' First Cut Is The Deepest,
her third song on the night, and Am I Still Dreaming, as well as her biggest hit, Chip Taylor's Angel Of The Morning. Other numbers included Etta James'
How Strong Is A Woman, Uptight and A Natural Woman, and P P came across strongly with a powerful and very soulful vocal style. Among the audience were
members of the cast of All Or Nothing, a forthcoming West End musical about the Small Faces, which features a young P P Arnold.

Details of set lists have been borrowed from The Vinyl Word - many thanks to Nick Cobban!

All photographs on this page are copyright by Paul Harris http://paulharrisphotography.blogspot.co.uk/.
Please do not reproduce without acknowledgement